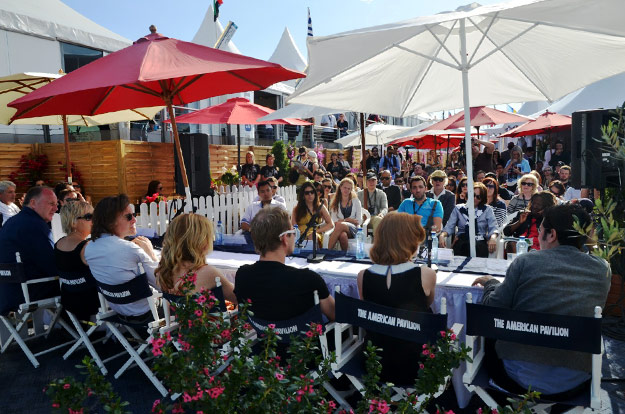 Founded in 1946, The Cannes Film Festival it is one of the most prestigious and publicized film festivals in the world. Held each May in Cannes’s Palais des Festivals on the French Riviera, the attracts thousands of Hollywood A-listers, industry professionals, and jounalists. During this once in a lifetime opportunity, enjoy access to screenings, press conferences, and other festival activities while experiencing the glamour and culture of the spectacular Cote d’ Azur.

Arrival at the Nice Airport, located approximately 40 minutes from Cannes. Transfer  via shuttle to the Best Western Cannes Riviera Hotel and Spa, located in central Cannes. Meet your guide and receive your Festival and Pavilion accreditation and join fellow film lovers for lunch on the terrace of The American Pavilion.

Cannes is host to the most prestigious and exclusive film event in the world.  Through The American Pavilion, film lovers are able to enjoy this event otherwise only open to industry professionals. The Cannes Film Festival is the largest event in the international film calendar and a thorough orientation is key to appreciating and understanding the Festival, its history, and  the role it plays in the industry. The American Pavilion, the longtime center of the American entertainment industry’s presence in Cannes, will serve as your guide for six magical days when the world’s cinematic community converges in the South of France.

Join us for an orientation over breakfast on The American Pavilion’s seaside terrace. Following this orientation to the festival and the city of Cannes, participants are free to attend the screenings and other events of their choice using the Festival accreditation. Film screenings take place every day between 8 am and midnight.

Day 3
To Market to Market

While The Festival showcases the very best of international cinema, The Marché du Film or Cannes Market, screens just about every type of film one could imagine. Join group leader for a tour of the film industry’s biggest trade show, located in the historic Palais des Festivals.

Join your fellow travelers and expert guide for a group luncheon at a local hot spot favored by industry professionals.

Each day in The American Pavilion a variety of panel discussions and celebrity conversations may take place. Participants are free to attend all American Pavilion events and free to explore the Festival and the Marché du Film.

Day 5
Beyond the Festival

By now, participants will have the lay of the land and may be interested in venturing beyond the boundaries of the Festival. In addition to the Market and Festival there is much to explore on the French Riviera. Visit the famous Hotel du Cap in Antibes, take a day trip to St. Paul du Vence, hop on the train to Monaco or continue to revel in the wealth of film, glamour and excess that Cannes has to offer.

On the last day of the Festival all the films are screened in the Palais from morning to night. This is the opportunity to catch up and see that film that everyone has been talking about! Check out the Festival boutique for Cannes souvenirs and take a last stroll along the Croisette.

Transfer by shuttle to the Nice airport.

Please note that Competition Films will be announced in mid-April. Programming at The American Pavilion is dependent upon the films that will be selected. Last minute programming is the norm in Cannes and is highly dependent upon actor’s, directors, producers and film professionals schedules. A general schedule will be released one week before opening of the event and there will be updates as programming information becomes available.