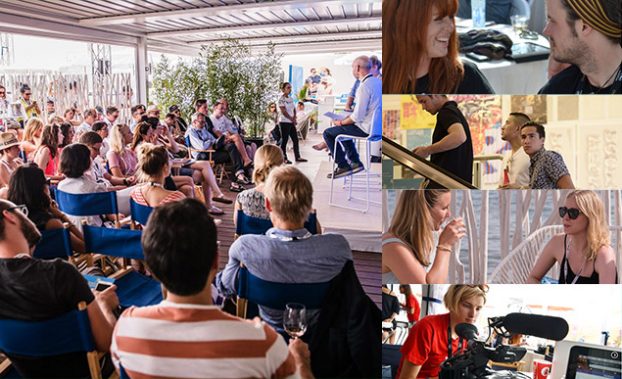 We are pleased to announce The American Pavilion Scholarship Fund. Each year over 200 students participate in the American Pavilion Student program at Cannes. There are film students, hospitality/event management students and culinary students in the program. Many qualified candidates do not come to Cannes because it is not financially feasible for them. The goal of the scholarship fund is to allow economically disadvantaged students to receive full or partial scholarships to allow them to participate.

We have partnered with Creative Visions [a 501(c)(3) non-profit] to help make the dreams of a few deserving students come true. Your donations will be granted to individual students who qualify for the programs, but are unable to afford the program price. The American Pavilion is grateful to its first institutional donor, the COLIN HIGGINS FOUNDATION, which has committed to supporting LGBTQ youth with financial needs. Above is a brief video made by 2019 alumnus Alex McFry, AmPav’s inaugural Colin Higgins Foundation Ambassador Scholarship recipient.

Our goal is to raise $100,000 for the fund. Your donations will be used to cover program fees which include housing, ground transportation and daily breakfast. Qualified students may also receive assistance with airline fees. Your donation is fully tax-deductible.

When [Ryan] Coogler came to Cannes in 2009 with a short film playing in the American Pavilion, it was the first time the Oakland, California-born filmmaker had traveled outside of the United States. Now he was returning to Europe’s temple of cinema as the director of a movie that has made $1.3 billion at the global box office… “It really is coming full circle for me, to be back in front of you guys with this film that means so much.”

“The American Pavilion Student Program sparked a fire that has become the work of my life, and I will always be grateful for that first access into a world I thought was totally inaccessible to me, Thank you and carry on!”

“Cannes with AmPav is still hands-down one of the highlights of my life. Not just my career, my life.”

“All of The American Pavilion programs are essential to starting a career in the entertainment industry. I am so grateful I was able to participate, and will always remember my experience as the first, most important building block of my career.”

“Just wanted to share with you how grateful I am for what you helped give me. Since coming back [from Cannes’16], I’ve started work at an association that’s also helping get my name to every working producer in Oregon and I’ve been to countless interviews for a variety of jobs—all of which seem to begin with asking how Cannes was. It has really changed my life. Thank you for that. I’m sure we’ll see each other again.”

“Experiencing Cannes’ can-do atmosphere changed the way that I live my daily life. From the second that I joined my peers at AmPav, I was overwhelmed by a feeling of social excitement and inclusiveness. The majority of my most valuable and long lasting social connections came from my time in Cannes. It proved to me that personality has power in this industry and it reminded me of why I wanted to be a part of it in the first place.”

“I tell people all the time that doing the AmPav program was truly life changing for me. Most of my closest friends in the past years have been former AmPavers and I even made the move to New York from Los Angeles with a friend I met doing Venice. My two former roommates have even been AmPavvers. From all of my years I have managed to stay in touch with so many people and have really formed a tight knit group with everyone. We’ve made it a point to travel to other film festivals together.”

“One of the greatest experiences of my life. … If you’re thinking about it, do it! You will not regret it!”

“My 2017 American Pavilion internship was life-changing . . . and has continued to give me press access to future festivals. I think I’ve got to be one of the luckiest students to have passed through your program, and the results were more than I could have ever imagined when I signed up for it.”

“I had an amazing experience and felt I learned a great deal. I got far more than I could’ve imagined from the trip and your program made navigating the festival extremely easy. Everything was positive from the day I started to the day I finished. Everyone was helpful and patient with myself and Cassidy.”

“It’s hard to leave AmPav. We laugh at just how large of an impact The American Pavilion has had on our lives—it has opened huge doors for us.”

“Cal State Long Beach gave me a strong, practical skill set, though I was uncertain of where to go to apply that knowledge. The Intensive filled in those gaps in my knowledge with resume-writing and interviewing workshops, but introduced me to many invaluable contacts. The uncertainty that I felt following graduation has lifted. A world of opportunity is open to me now. Thank you again for giving this local girl a chance! I could not have gotten this far without it.”